Included below are the various Awards bestowed by the Grand Commandery of Knights Templar of Minnesota. 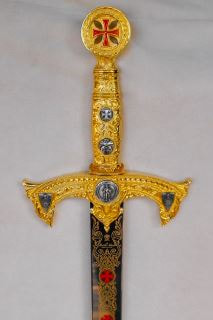 The Grand Commandery of Minnesota would like to honor the legacy of Neil E Bengtson, Jr. by naming the Grand Commandery sword award after him, calling it the S.K. Neil E Bengtson, Jr. Memorial DeMolay Chapter of the year sword award.  We have decided to use a point scale to determine who would receive the award. A Chapter being involved, not in just membership but also civic and patriotic service, not forgetting the cardinal virtues that all DeMolay’s are familiar with, does this.  It would run for a full year from July to July and be awarded at the Minnesota DeMolay banquet at their annual Conclave on the first Saturday in August. This will be a traveling award. A plaque will be given to the Chapter to keep.

The Ralph Kirk Award is presented to a Commandery for Patriotic and Civic activities.   The term of the award runs from June 1st of one year to May 31st of the following year. This form must be  E-mailed to the Grand Recorder by June 1st. There will be an award given to a Commandery over 100 members and one to a Commandery under 100 members. The points awarded are for participation in many different fields of interest, from membership and public ceremonies to activities and leadership. Please observe your special observances (Easter, Christmas, and Ascension). These are an important part of a Commandery existence and are included in the points.

Companion of the Temple

The Companion of the Temple is awarded by the College of Honors for service to the Templar Order.  Nominations are sent to the Jurisdictional Deputy for Minnesota (SK Daniel Sherry) with no exceptions.  All nominations must be received by the Jurisdictional Deputy no later than February 1 of each year.  Both men and women are eligible to receive such award.  Additional information on the award, the cost, and history are included in the nomination.  Additional information on this award can be found on the Grand Encampment Website.

Companion of the Temple Nomination FormDownload

Knight Commander of the Temple (KCT)

Any holder of the KCT may make nominations for the Knight Commander of the Temple (KCT) to the deputy in each Grand Commandery. Knights Commander of the Temple are selected by the deputies of each state, in accordance with the number allotted to each Grand Commandery, and their names are forwarded to the College of Honors. Since this honor is given for service to the order, the fraternity, the community, or mankind, it is left to the deputy of each jurisdiction to prioritize nominations within the guidelines given.   Additional information on this award can be found on the Grand Encampment Website.

The Knight Templar Cross of Honor is the highest honor that this Jurisdiction can bestow on a single Sir Knight each year.  Each Commandery may nominate one Sir Knight per year, and return the following nomination to the Grand Recorder no later than February 1 each year.   Late nominations will absolutely not be accepted.  Any questions should be directed to the Grand Recorder.  Please remember that the nomination must be approved by a motion of the Commandery.  Additional information on this award can be found on the Grand Encampment Website.