The Grand Commandery of Knights Templar of Minnesota

The Knights Templar Mission:  To unite Masons by answering the noble call to practice chivalry and charity in preservation of historic Christian traditions. Every Christian Mason should be a Knight Templar.

The Cars for Cash fundraiser at the Minnesota Renaissance Festival is the primary fundraiser for the Holy Land Pilgrimage fund.  This philanthropy allows us to send a Minister to the Holy Land each year.  Over the course of the weekend, September 10 and 11th, from 7:30 – 4:00 PM our Templars will be directing cars to where they should park.  As a side benefit, if you work at the fest, you are able to come into the grounds for free after your shift.  Please consider working one or more shifts for this wonderful Philanthropy!

The Knights Templar is a Christian-oriented fraternal organization that was founded in the 11th century. Originally, the Knights Templar were laymen who protected and defended Christians travelling to Jerusalem. These men took vows of poverty, chastity and obedience, and were renowned for their fierceness and courage in battle.

Today, the Knights Templar display their courage and goodwill in other ways. They organize fund-raising activities such as breakfasts, dinners, dances, and flea markets. They support Masonic-related youth groups and they raise millions of dollars for medical research and educational assistance.

Currently, Templar membership consists of people from all walks of life, including doctors, lawyers, clergy, businessmen and entertainment personalities, all of whom profess a belief in the Christian Religion.

Origin of Our Grand Commandery 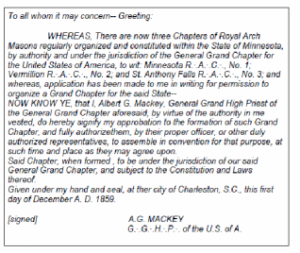